Taunton Town Football Club are excited to confirm the creation of a Player Pathway for young footballers in Taunton and the surrounding areas from the age of 4 until young adult.

The formation of this enhanced structure follows meetings and consultations with all interested parties and will be implemented from the start of the 2021-22 season. The current arrangement, where players from Taunton Youth Football Club can progress to Bridgwater and Taunton College, will remain while there is now an additional link with local club Bishops Lydeard, with the ultimate pathway being the progression of young players into the Taunton Town first team squad.

Commenting on this innovative new development, the Chair of Taunton Youth FC Community Trust Steve Willis said: "We have long recognised that we needed to fill a gap, both in terms of our offering and for those players who might, for example, choose an apprenticeship option rather than continuing with formal education post year 11. As far as we are concerned, this arrangement ticks all of the boxes."

Local youngsters can join this exciting pathway from the age of 4 via Taunton Youth FC Juniors who cater for players up to the age of 11, at which point the next door opens to Taunton Youth FC who compete in the Junior Premier League. The pathway splits from the age of 16 when players can take advantage of three options, the first being via our current partnership with Bridgwater and Taunton College. Adam Sturt, Head of Sport, Outdoor Education and Public Services, commented "Our successful partnership with Taunton Town Football Club continues to develop players within our dual career framework. Our success within the South West Counties Youth League continues to prove our commitment to the game and to elite and talented local players, whilst offering players an exceptional educational experience and progression, to further their careers and futures".

However, young footballers will also now be able to take advantage of two new pathways, one of which feeds into Bishops Lydeard Under 18s. Chairman of Bishops Lydeard Football Club Gary Brown remarked: "This initiative is a huge opportunity for committed young players to prove themselves in a safe environment. The pathway will allow the Town's youth to continue their journey into adult football with a seamless link as they are encouraged to play at the highest level possible. Be it through BTC, BLAFC Under 18's, BLAFC Reserves, First Team or ultimately TTFC, our aim is to mentor the players through the stages of their development while keeping them focused on their aspirations."

The third pathway will enable players to progress to a Taunton Youth FC Under 18 side which will participate in the Somerset FA U18 League on Sunday afternoons.

The next step in the journey will see players able to carry on with their education and footballing development at University Centre Somerset whilst also being able to link with Bishops Lydeard and continue their progress with the club's Reserves and First Team, the same pathway being available for players from Bishops Lydeard U18s and Taunton Youth FC U18s. Taunton Town FC club legend, and a founding trustee of Taunton Youth FC, Paul West enthused: "It stands to reason that not everyone who passes through our programme (or joins the pathway via a different route) will play for Taunton Town. However, what pleases me most is that there is now a connection which provides an opportunity for all local players to reach up high - and not just the early developers, but the late bloomers as well." 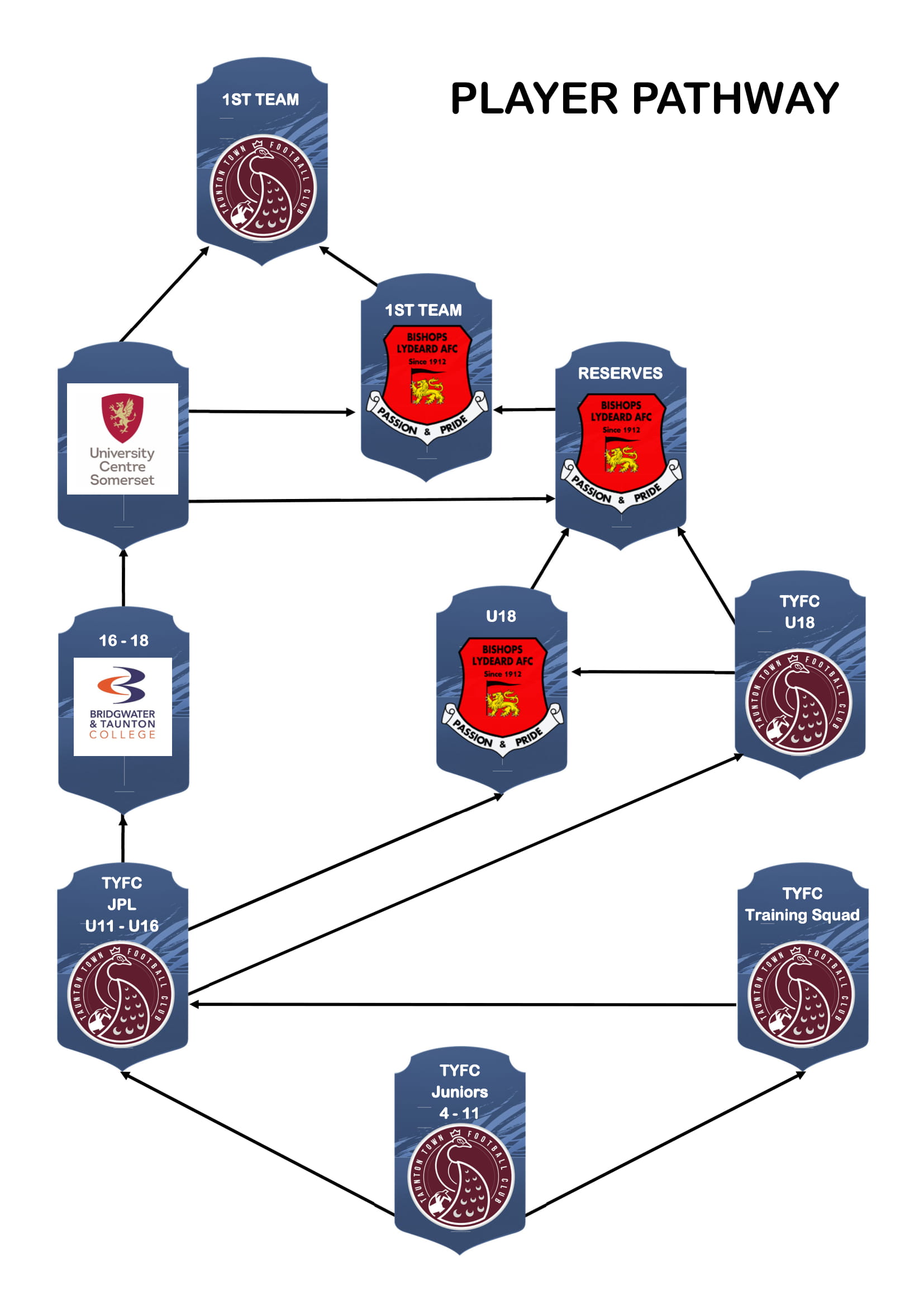 The final piece of the pathway jigsaw is the exciting route from both Bishops Lydeard FC 1st team and University College Somerset into the Taunton Town FC 1st team squad, whose Head of Football Rob Dray said: "The new link with Bishops Lydeard FC alongside our existing partnership with BTC can only be a good pathway for young players in the Taunton area. As we continue our progression, the best players in the area will be key as we aim to drive the standard higher in and around the town. The opportunities that will open up can only be a positive and we look forward to these players coming through." The vision is for this initiative to help develop talented local youngsters to fully realise their potential with the hope that the most talented and hardworking go on to represent the Peacocks in the future. Taunton Town FC Chairman Kevin Sturmey concluded: "We have recognized for many years that 16-21 is an age group where the drop out from football is alarming. Our Partnership with BTC/UCS has helped bridge this gap over the last four years but of course it isn't a "one size fits all". While BTC is still our recommended Pathway for education/elite football, we also feel we have needed an enhanced Pathway to still give opportunities to play Youth football and progress into adult football. Not every potential player will go to College and some will go into an apprenticeship or start work. This covers all bases at the most complicated age group of 16-18, then 18-21. Players who develop later can still find their way to the pinnacle by playing in any of the teams available and also sample adult football with Bishops Lydeard who have had a great set up for many years now and it will also add another age group who may choose to go through the elite football Pathway with BTC, so this opens up more doors for the College." "If we can develop just one player through the enhanced system, it will be a success as the standard we need to be competitive and also to reach the National League and beyond will keep being raised every season. Ollie Chamberlain will be the role model for this journey as he started at Lydeard, went to BTC while playing at youth level at Taunton but then had to play in the Western League at different clubs to sample adult football before completing his journey with the 1st team when he had developed. The new enhanced Pathway will allow a seamless transition from each level as adult football can be provided by either Bishops Lydeard or UCS or both."